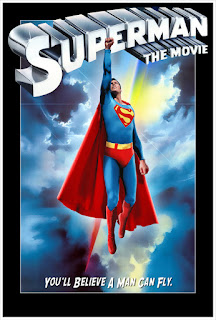 National Board of Review
Top Ten Films of 1978 They can be a great people, Kal-El, they wish to be. They only lack the light to show the way. For this reason above all, their capacity for good, I have sent them you... my only son.

It's hard to imagine now in the era of Marvel films ruling multiplexes across the country, that there was a time when superhero films were not only rare, the were practically non-existent. Superman: The Movie is not the first superhero film, there were superhero films that came before . Comic strip characters like Dick Tracy and The Phantom had many serial adventures in the 1940s, as did characters that are still popular today like Captain America and Batman. Superman was no different, starring in his own serial and a 1950s television show with George Reeves as the titular character. But never before had there been a major motion picture released by a major studio like Warner Brothers.  The production of Superman: The Movie was unprecedented. While Star Wars took moviegoers to a galaxy far far away the summer before, Warner Bros. promised audiences that "you will believe a man can fly." And with a price tag of $55 Million, the biggest budget of a movie ever up to that point, they certainly spent enough money to make that happen.

The film was long in development at Warner Bros. Alexander and Ilya Salkind, a father/son production team, bought the film rights from DC Comics (not yet a Warner subsidiary) in 1973, but it wasn't until 1978 that the film opened in theaters.  The casting process for the major roles was long, as was finding a director and screenwriter to adapt the material. The budget was also enormous, at the time it was the most expensive film ever mad. Richard Donner was eventually hired in 1976 as the director after the Salkinds were impressed by his work on The Omen. Almost immediately, Donner threw out most of the pre-production work, including Mario Puzo's script, and started from scratch.  Puzo's script was full of too much camp and was apparently too bloated, with both scripts totalling 550 pages. Tom Mankiewicz was brought on to completely re-write the project, however Puzo still remains as the credited screenwriter. It was decided early on that both Superman and Superman II would be shot simultaneously, which is why we get the set-up of General Zod and his henchman at the beginning of the first film.  (The first film originally ended with the Krytponian criminals escaping the Phantom Zone in a cliffhanger.) However, Donner and the Salkinds did not work well together and at one point stopped speaking with each other, using director Richard Lester as an intermediary.  A decision was made to focus completely on the finishing the first film, despite the fact that 75% of the sequel had already been filmed. Lester would eventually finish, and get directing credit, for Superman II. 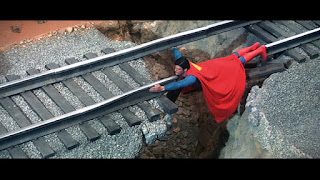 Despite behind-the-scenes production drama, none of it is evident on-screen. Superman: The Movie is a delightfully fun, at times campy, but ultimately inspiring piece of comic book cinema. To this day, it sets the standard for the superhero origin story. The film begins on Krypton, many years ago, as the planet is on the brink of destruction. Jor-El sends his only son, Kal-El, in a tiny space ship off the doomed planet towards Earth. Jor-El knows that Earth's sun will give him powers beyond those of mortal men, that in fact he will be a god. However Jor-El also knows that perhaps human beings need a figure like Kal-El to inspire them, to give them hope and to save them. The rocket crash lands in Kansas, where baby Kal-El is discovered by the Kents, an older couple who live in a farm. The Kents teach Kal, whom they rename Clark, good, old-fashioned American values. So that one day, this visitor from a strange planet, this god who walks among us, will stand for truth, justice and the American way. On the verge of adulthood, Clark receives a "calling" from the rocket ship he came to Earth in and follows this calling to the North Pole, where he creates his Fortress of Solitude. In this Fortress, a ghostly computer program of Jor-El teaches Kal how to use his powers and of his Kryptonian heritage. When he emerges as a 30 year old man, Kal is ready to introduce himself to the world. He takes a job at the Daily Planet, a major Metropolitan newspaper, disguised as a mild-mannered reporter. But he soon sheds his disguise in order to stop criminals, save people and introduce himself to Lois Lane (and the world) in a most spectacular fashion. He is dubbed "Superman" by Lois and quickly captures the attention of Lex Luthor, a notorious criminal genius.  Can Superman stop Luthor's evil scheme of destroying California for financial gain?


I'm here to fight for truth, and justice, and the American way.

Superman featured ground-breaking special effects, which earned them an Academy Award at that year's Oscars. The tagline for the film was "You will believe a man can fly." And audiences did. However, as impressive as the effects were, the film would have been nothing if Superman, himself, didn't work. And 100% of the credit goes to the late, great Christopher Reeve in the title role. Many stars were considered, offered and tested for the role including the now unlikely candidates of Muhammad Ali, Clint Eastwood, Dustin Hoffman, Bruce Jenner, Arnold Schwarzenegger, Al Pacino and James Caan. But in the end, they went with the relatively unknown Reeve.  With all due respect to all past and future Supermen, Reeve's performance is as iconic as Sean Connery's James Bond or Harrison Ford's Indiana Jones. George Reeves will always get credit for popularizing the character on television, but he reportedly hated the role and always played too close to camp. Brandon Routh did a great Reeve impression in Superman Returns (a film that isn't as bad as people think it is), but it just further emphasized that he was just not Reeve. And Henry Cavill... well... let's just say, that's not Superman.  Reeve did something with the character that no one else has ever quite captured. He put in TWO performances: one as Clark Kent and one as Superman. And it's the Clark Kent performance that's the most important. Much like Quentin Tarantino so elegantly put it (via David Carradine) in Kill Bill Vol 2:  "Superman didn't become Superman. Superman was born Superman. When Superman wakes up in the morning, he's Superman. His alter ego is Clark Kent. His outfit with the big red "S", that's the blanket he was wrapped in as a baby when the Kents found him. Those are his clothes. What Kent wears - the glasses, the business suit - that's the costume. That's the costume Superman wears to blend in with us. Clark Kent is how Superman views us. And what are the characteristics of Clark Kent. He's weak... he's unsure of himself... he's a coward." Coward may be a little harsh, but the rest of it is spot on. And that's how Reeve played him. Weak, unsure and, yes, cowardly. And all to draw suspicion away from him to protect his loved ones from harm.  Reeve's performance has yet to be topped, and I'm betting it never will be. 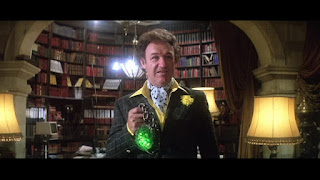 Interestingly enough, Christopher Reeve was not top-billed, even though he was the title character. Marlon Brando and Gene Hackman received title credits ahead of the "rookie" Reeve.  Brando was heavily sought after by the Salkinds to get major star power for the film. Brando would play Jor-El, the prophet who correctly predicts Krypton's destruction and sends his son away for a better future. In the 1970s, Brando was notoriously difficult to work with and he had a reputation for being lazy. But the international success of The Godfather made him a major box office attraction again and it was too much for the filmmakers to ignore. Upon first meeting with the producers, he initially refused to appear on-screen, trying to convince them to use a green bagel with his voice (seriously.)  Donner eventually flattered Brando into playing the role on-screen, to which he agreed provided they met his price of $4 million and 12% of the box office. He also insisted his scenes be finished in 12 days and refused to learn his lines, so Donner had to strategically place cue cards out of camera shot, much like Coppola did for Brando in The Godfather. Despite all this, Brando delivered an earnest and memorable performance as Jor-El. Kal-El's "reunion" with his father in the film and in Donner's version of Superman II are actually quite moving, even though the actors did not actually film together.

You were great in your day, Superman. But it just stands to reason, when it came time to cash in your chips, this old... diseased... maniac would be your banker.

Where comic book purists may have ruffled feathers, however, is in the depiction of super villain, Lex Luthor. Luthor is the balding criminal genius that matches his brains against Superman's brawn. In the comics, Lex is best known by comic book fanboys as a cold, calculating businessman. Gene Hackman's performance is very far from that. In fact, it's so campy, that he seems like he stepped off the set of the old Adam West "Batman" TV show. You get the impression that Hackman basically went over the top because that's how he believed comic book villains are supposed to act.  However Hackman's scenery chewing shtick still works for the tone of this film. And while there are many scenes of him interacting with his buffoonish henchmen Otis (Ned Beatty) and Miss Teschmacher (Valerie Perrine), when he finally encounters Superman and tells him of his insane scheme to blow up California, he comes off like a true madman. Furthermore, when traps Superman with the Kryptonite, he is cemented as one of the great screen villains.

The rest of the cast also delivers. Margot Kidder, who's casting process for Lois Lane was almost as exhaustive as Superman's, brings the right spark to the role of the smart-ass reporter. She also has fantastic on-screen chemistry with Reeve, which for these two characters is incredibly important. No other Superman film has quite been able to capture that.  Jackie Cooper, Glenn Ford, Terrence Stamp and Marc McClure also help fill out the supporting cast, giving life to the world of Metropolis, Smallville and Krypton. 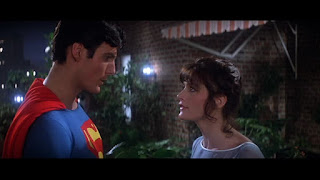 And of course... who can forget that iconic music by John Williams. To this day, the most recognizable and iconic superhero theme song of all time.  As much as films like The Avengers or the Dark Knight have elevated the comic book genre, with all due respect to their composers, they are missing the iconic musical march that John Williams delivers.  Danny Elfman did a similarly iconic score for 1989's Batman, but seemingly no other superhero film has yet to have a wonderfully beautiful theme as this.


Superman: The Movie was released in December of 1978, and just in time for Christmas, became a massive financial success. It was the second highest grossing film of the year, behind Grease, and went on to become the 6th highest grossing film of all time to that point. It was also Warner Bros' most financially successful of all time. It would spawn 3 more sequels with Reeve, a return to the character under Bryan Singer with Brand Routh in the title role and kickstart DC Comics' new "cinematic universe" with 2013's Man of Steel. More importantly, Superman is an essential film as it built the foundation of what is now currently dominating the box office. Without Superman: The Movie, there is no X-Men franchise, there is no Iron Man, no Spider-Man and no Dark Knight trilogy. Thanks to this film, we all believe a man can fly.