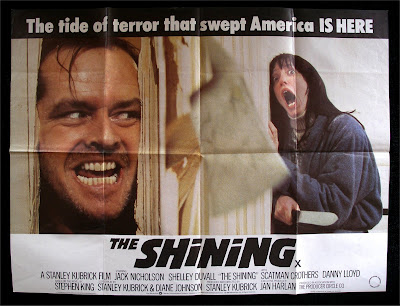 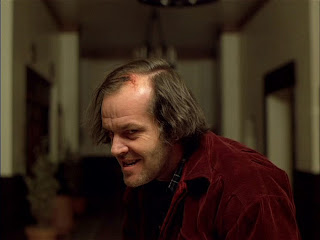 Some places are like people: some shine and some don't.
THE PLOT
Jack Torrance is a struggling, alcoholic writer that takes a job as a caretaker for the Overlook hotel during the winter season.  He feels that the isolation and solitude will help him get over his writer's block while also making a little money, taking along his wife and his psychic son to keep him company.  Soon the hotel is snowed in by a massive snowstorm and Jack's frustrations and the hotel's haunted past slowly starts to drive Jack into a murderous psychotic state.
WHY IS IT ESSENTIAL?
The Shining, by far, is one of the most legitimately terrifying films of all time and its influence can still be seen to this day.
Heeeere's Johnny!
The highlight of this film is clearly Jack Nicholson.  Nicholson has often been criticized as sometimes going over-the-top and being hammy.  I can't disagree with that. However, one could not criticize him overacting in this film.  At least, not until the climax... but by then a bravura performance is earned and, frankly, needed.  The whole film rests on his performance.  When we first see Jack Torrance, he is reserved, a little charming and slightly awkward.  The plot reveals that he is a struggling alcoholic who may have been abusive in the past. What we see at the beginning of the film is subtle... a man trying to keep his demons in check, and trying to be normal.  As the film progresses, and Jack's writer's block continues to frustrate him and he is cut off from the outside world via the snowstorm... slowly but surely you see his madness start to emerge.  The fact that the hotel is haunted also doesn't help matters either and the cracks in his psyche become giant fissures.  When he snaps, and boy does he SNAP, it's completely earned as the film has brought both Jack and the viewers to this madness.  It's perfectly executed filmmaking and acting here.  Perhaps it wasn't all acting, however, as Nicholson has stated in interviews that the script would change constantly, frustrating the actors, specifically Nicholson on a daily basis.  Interestingly enough, Robert DeNiro, Harrison Ford and Robin Williams were all considered for the part, but were rejected by author Stephen King.
Terrifying Shots 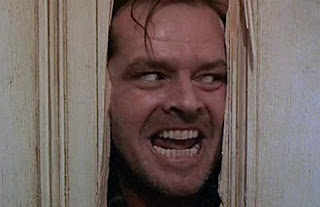 One of the main reasons the film is so genuinely terrifying, in addition to Nicholson's performance, is the way the film is shot. The cinematography by John Alcott sets the mood immediately.  Once the staff leaves the hotel and just the Torrances are left... the film just looks like something bad is about to happen.  Obviously Kubrick's vision guides the look of the film, which has some of the greatest and iconic horror movie shots of all time.  The most infamous obviously is of a deranged Torrance shoving his face through a hole in a door that he just busted open with an ax and screaming the famous (ad-libbed) "Heeere's Johnny!" (That scene, by the way, used a real door because Nicholson, who had experience as a fire marshall, tore down the fake door too quickly.) But there's also the reveal of the Grady twins standing in the hallway as Danny rounds the corner on his  big wheel (which used the revolutionary Stedicam technology).  Elevators of blood. Labyrinth chase in the blizzard.  All of these shots are engrained in your memory for years to come.
Setting is Everything

The Overlook Hotel is one of the scariest places ever shot on film.  It is a remarkable accomplishment in set design.  While it may seem like a static location, it has an undeniable presence.  It feels menacing by just existing.  It feels like it has been around forever, it feels like it does have a haunted past.  The film doesn't need to show us the ghosts for us to feel that it is haunted.  The use of mise-en-scene works to give the hotel its dominant presence, and even though it is a huge space, it feels claustrophobic and threatening.
Interpretations (Spoilers Ahead)
Many thoughts are abound as to the ending of the film. Is the hotel haunted?  Is Jack just psychotic?  What about the photograph at the end of the film? Was Jack Torrance "absorbed" into the evil of the hotel? Or was he a reincarnation of the evil of the hotel?  Questions like this is what make the film re-watchable and enjoyable on many different levels.  The Shining, over 30 years later, remains a horror masterpiece.
at August 17, 2012 1 comment: Links to this post 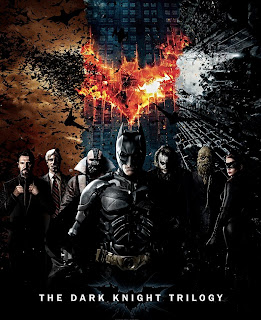 The conclusion of FORCED PERSPECTIVE’s BATMAN series has arrived, and due to its SUPER-DUPER long running time, has been divided into 3 parts, with the first discussing Batman Begins. Join SportsGuy515 and Adolfo, along with the all-star Superfriends panel of Big D, Mr. Eddie, Hamza, and Headcase, as they discuss the first chapter of Christopher Nolan’s Batman trilogy, with a few pinches of WHACKINESS thrown in. DOWNLOAD/STREAM NOW! 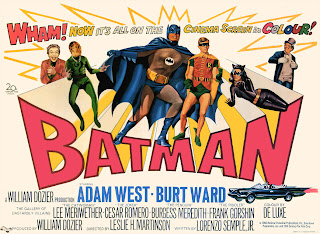 
For those that may have been living under a rock, Team Forced Perspective (With some special guests) have been doing special Batman-themed episodes all in anticipation for the huge The Dark Knight Rises premiere that took place on July 20. Given that these episodes were long and had tons of guests, we wanted to make sure everyone had a chance to give their opinion… so I’m writing down all my thoughts on each of the major Batman movies that I didn’t get a chance to voice.

Let’s start with the campiest film of the bunch (at least until 1997): Batman The Movie.

Let’s start at the beginning.  Batman: The Movie was born out of “Batman” the television series on ABC television.  The show debuted in 1966 and ran for 3 seasons.  At the time, television executives were looking for a new kid’s adventure show to play alongside “The Lone Ranger” and “Superman.”  However, when tv executive Yale Udoff attended a party at the Playboy Club one fateful night, a series was born.  The Playboy Club had been hosting screenings of the old Batman serials from the 1940s as a gag… and they were a hit.  Udoff saw the campy potential in the show and pitched the idea of a campy, corny, action show in prime time and the rest is history.

The show, which was heavily reliant on a “villain-of-the-week” formula, was fast-tracked into production with the film being planned to hit theaters in between seasons.  The show and the film was fast-paced, campy, goofy and often-times surreal.  Adam West played the comic straight (Bat)man to the villain guest stars.  The film featured the four most memorable villains of the series:  The Joker, The Penguin, The Riddler and Catwoman.

The Joker was famously portrayed by Caesar Romero who, while refusing to shave his mustache for the role and just painted over it, for better or worse is cinema’s first on-screen Joker.  Much debate is centered around who the best Joker ever was, but this reviewer’s opinion is that every actor who has portrayed the Joker worked perfectly for his particular “universe.”  The “Batman” tv series/movie was so over-the-top and campy, that its Joker also needed to be… and Romero provided that.  Frank Gorshin portrayed the Riddler, and to this day I honestly don’t think anyone’s done it better (sorry, Jim Carrey.)  Rocky fans may recognize a familiar face… Burgess Meredith (Mickey) as the villainous Penguin, also camping it up.  Rounding out the rogues’ gallery is Lee Meriwether as Catwoman.  Julie Newmar was the original (and sexiest) Catwoman in the television series, but injured her back prior to production on the film and was replaced by Meriwether.

The plot is pretty dopey, truth be told.  Batman and Robin get a tip about a foreign dignitary being in peril aboard his yacht, but they quickly find out it’s a trap complete with exploding shark (seriously) that is dispatched by shark repellant spray (no, seriously.)  Batman quickly deduces (in record time) that his four greatest foes are behind the attack, and they are now in possession of a dehydration ray, which they plan to use to reduce the entire United Nations to dust!  The scoundrels.

The film is pretty much exactly like the show… it’s a 105 minute long episode.  And if you like the show, you’ll love the movie. It’s so tongue-in-cheek that it’s practically making out with you.  If you don’t like the show… uh, skip the movie.  It’s pure camp.  I’m a hardcore Batman fan that prefers his Caped Crusader to be dark and gritty, but I can appreciate the show and this film and its place in pop culture history.
at August 02, 2012 Links to this post