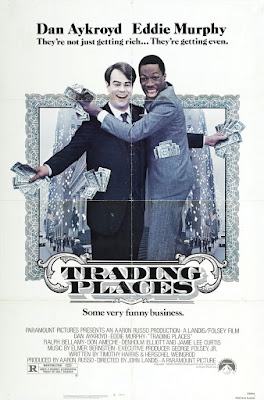 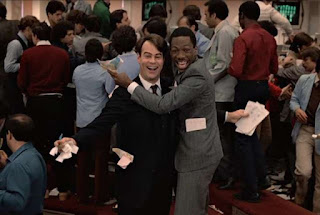 SPOILERS AHEAD
You know, it occurs to me that the best way you hurt rich people is by turning them into poor people.
In this modern re-telling of Mark Twain's The Prince and the Pauper, John Landis explores class and race divisions of the 1980s. Louis Winthorpe III, a wealthy, successful and snobbish commodities broker for the Duke & Duke firm. Eddie Murphy is a street hustler and conman, Billy Ray Valentine. The two men's paths inadvertently cross one day, when Louis mistakenly (with a dash of racism) believes that Valentine is trying to rob him. The police quickly descend on him and cart him off to jail. Meanwhile, this gives Randolph and Mortimer Duke, Winthorpe's bosses, an idea. The two men are constantly arguing on the long standing debate of nature vs nurture. A plot is born as Randolph (Bellamy) bets his brother Mortimer (Ameche) that he can take a "useless" con man like Valentine, give him every advantage of wealth, and turn him into a success. Mortimer takes the bet, theorizing that even in a disadvantaged state, Winthorpe's superior genes will rise to the top and he can overcome any situation. Soon, the Dukes frame Winthorpe for theft, while at the same time bailing Valentine out of jail. They gift Valentine Winthorpe's home, money and butler, while Winthorpe spends the night in jail. His fiancee breaks up with him when a prostitute (paid off by the Dukes' henchman Clarence Beeks) comes onto him in front of her. 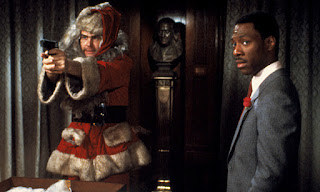 In his new role, Valentine learns all about trading and the stock market, finding he has a knack for it due to his street smarts. He quickly adapts to the pampered lifestyle and makes the most of it. Winthorpe flounders, first taking residence with the prostitute, Ophelia, (Jamie Lee Curtis), and falling into a downward spiral of drinking, drugs, pawning possessions and buying weapons. It all comes to a head when he tries to frame Valentine by planting drugs in his (old) office. The Dukes see what poverty has brought on to Winthorpe and settle their bet. Randolph wins for the tidy sum of 1 dollar. Valentine learns of the bet, tracks down Winthorpe and the two plot a scheme to take down the Dukes once and for all, using the stock market and (orange juice) as their main weapon.
Trading Places is a hilarious comedy, from start to finish, thanks to Murphy and Aykroyd, who were both at the peak of their post-Saturday Night Live careers. What is striking is the themes of race and class that are still prevalent today. Mortimer Duke, the Don Ameche character, believes that nature will win out in the bet. It is not a huge logic leap to see that he's talking about Aykroyd's status as a white man will always beat out Murphy's status as a black man, expecting Winthorpe to succeed and Valentine to fail. We also see how incredibly difficult it is for Aykroyd to survive and adapt to a socio-economic situation that plagues many African Americans. The film, through its comedic premise, is very clearly arguing for a leveling of the playing field. The film climaxes with the Dukes being punished for their greed, taken down by the very people they exploited, Valentine and Winthorpe. Or to put it another way, when the working man unites, regardless of race, they can topple the old money establishment. It's extremely satisfying.
The film was a major financial success for Paramount, grossing $90 million (approx. $263 million adjusted for inflation) and placed 4th of the top grossing films of 1983, behind Return of the Jedi, Terms of Endearment and Flashdance. 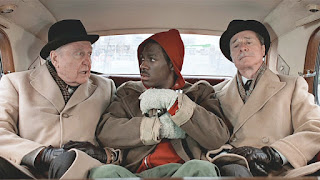 The film is not perfect. Some of the comedy is dated and overly broad, like Clarence Beaks getting stuck inside a gorilla suit. And the blackface by Aykroyd in the third act is embarrassingly cringe-worthy. But the performances by Aykroyd and Murphy overcome any bad comedy and turn it into all time classic. (Though, admittedly, I still need to look up exactly what Valentine & Winthorpe did to the Dukes at the end of the film every time I see it, as to the layman viewer, it's a little complex. All that really matters is that you know the Dukes lose.) Jamie Lee Curtis also got to display her comedic chops for the first time, breaking out of her "scream queen" roles in films like Halloween and Prom Night.  Denholm Elliot as the put-upon English butler and Don Ameche and Ralph Bellamy as the Dukes, round out the cast nicely.  A perfect response to the "greed is good" attitude of the 1980s.
TRIVIA: The film was originally supposed to star Gene Wilder & Richard Pryor, who starred in successful buddy comedies like Silver Streak and Stir Crazy.
at January 31, 2018 No comments: Links to this post

Now On YouTube: Short Subjects - A Look at the 2018 Oscar Nominations

Email ThisBlogThis!Share to TwitterShare to FacebookShare to Pinterest
Labels: Podcasts, Trailers and Videos

The Essential Films Podcast Ep. #20: Short Subjects - A Look at the 2018 Oscar Nominations 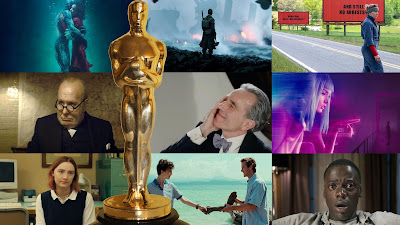 In today's Short Subjects episode, I go down the entire list of Academy Award nominees, announced on January 24th. From Best Picture to Best Visual Effects; From Call Me By Your Name to War for the Planet of the Apes. I cover my thoughts, my predictions and why I think Three Billboards Outside Ebbing Missouri is overrated.