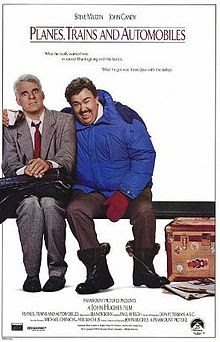 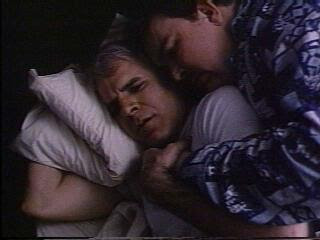 
When the name John Hughes is mentioned, instant association with high school coming-of-age tales like The Breakfast Club and Sixteen Candles come to mind.  But Hughes was more versatile than keeping himself confined to the restraints of high school dramedy.  He was also capable of scripting hilarious, and at times moving, tales of adulthood.  This is the case of Planes, Trains and Automobiles... an essential Thanksgiving classic.

Neal Page is a marketing executive that's trying to get home to Chicago in time for Thanksgiving dinner.  Unfortunately, fate conspires against him throwing bad weather, cancelled flights and broken down trains in his path. Complicating matters is his unwanted companion on the journey, Del Griffith, an obnoxious, but well-meaning, shower curtain ring salesman that constantly tests Neal's patience. 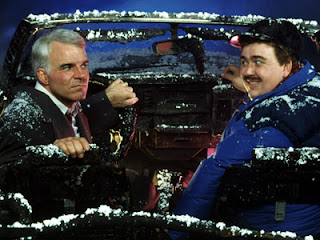 Neal is played by Steve Martin, who can play a comedic straight man better than anyone.  All Neal wants is to get home and be with his family.  The constant obstacles that get in his way of doing so drive him to the brink of insanity, which results in comedic benefits for the audience.  What makes great comedy is the ability to emphasize with the main characters.  And who hasn't had travel problems with planes, or trains, or busses, or rental cars?  Well, Neal, tragically, has to deal with transportation failure on all fronts.  He reacts how all of us would react.  The key scene of ultimate frustration is when he rents a car, and after the airport shuttle takes him to the rental lot, he discovers the car is missing.  His profanity-laced tirade at the rental car agent is exactly what all of us wish we could do when placed in this situation, but are too tied down by social convention to do so.  Martin excels in this role. 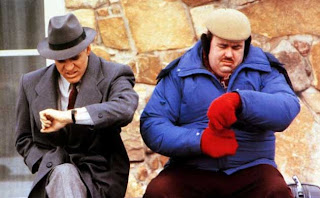 The true heart of the film, however, is John Candy.  Candy, in this author's opinion, was robbed of an Academy Award Best Supporting Actor nomination for his portrayal of Del Griffith.  Candy's Del is the nightmare passenger we all dread when we board a plane. He's obnoxious and chatty and large.  But first appearances, as they usually are in celluloid, are deceiving.  There is more to Del than he lets on, and while we the audience are at first empathetic with Neal for having to deal with this oaf, as the film progresses our opinion reverses.  We come to like Del, and notice that he only has good intentions oat heart. At the same time, we become more frustrated with Neal for not recognizing the fact the Del is really just a nice guy.  Finally, at the end of the film, when Neal finally accepts Del, we learn of a sadness in Del's life (which we will not get into in this review).  The reveal makes Del much more tragic and sympathetic.  Candy doesn't play it for manipulation.  He's subtle and the camera lingers on his face for just the right amount of time to get the emotional pay off.

The pairing of Martin and Candy had not been paired in cinema before this film, and were not paired afterwards. A true crime considering their pitch-perfect comedic chemistry... the world was robbed of a great comedy duo.  Planes, Trains and Automobiles should be watched every Thanksgiving. Not just because the film takes place during the holiday, but because it reminds the viewer of everything for which you should be thankful.

50 Years of James Bond: The Movie


In celebration of 50 years of James Bond and the release of Skyfall, this video has been released stitching together all 22 James Bond films into one 2 hour movie using 5 minutes of each movie.  It’s more seamless than it sounds and ultra cool. Check it out.