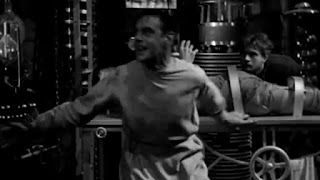 Happy Halloween! As is our somewhat annual tradition, this website presents you with another "Top 100" horror themed list! This year, I present the 100 Greatest Horror Movie Quotes. The following quotes are the most iconic, most famous or most brilliant quotes from horror movies from all eras.  Enjoy!

97.  "One thing about livin' in Santa Carla I never could stomach. All the damn vampires."
- Grandpa

95.  "First of all, keep him out of the light, he hates bright light, especially sunlight, it'll kill him. Second, don't give him any water, not even to drink. But the most important rule, the rule you can never forget, no matter how much he cries, no matter how much he begs, never feed him after midnight."
- Chinese Boy

86.  "There is more evil around us here than I have ever encountered before."
- Sherlock Holmes

82.  "Now clear your minds. It knows what scares you. It has from the very beginning. Don't give it any help, it knows too much already."
- Tangina

77.  "I need to return some videotapes."
- Patrick Bateman

74.  "You know, it's Halloween. I guess everybody's entitled to one good scare, huh?"
- Brackett

65.  "You've seen horrible things. An army of nightmare creatures. But they are nothing compared to what came before. What lies below. It's our task to placate the Ancient Ones. As it's yours to be offered up to them. Forgive us. And let us get it over with."
- The Director

61.  "I met this six year-old child with this blank, pale emotionless face, and the blackest eyes - the Devil's eyes."
- Dr. Loomis

54.  "You know what the most frightening thing in the world is? It's fear."
- Mark Lewis

50.  "I like to disect girls. Did you know I'm utterly insane?"
- Patrick Bateman

39.  "Listen to them. Children of the night. What music they make."
- Count Dracula

38.  "I RENOUNCE GOD! I RENOUNCE HIM! I shall rise from my own death, to avenge hers with all the powers of darkness!"
- Dracula

36.  "There are certain RULES that one must abide by in order to successfully survive a horror movie."
- Randy

29.  "Where should we be if no one tried to find out what lies beyond? Have you never wanted to look beyond the clouds and the stars, or to know what causes the trees to bud? And what changes the darkness into light?
- Dr. Henry Frankenstein

18.  "I do wish we could chat longer, but I'm having an old friend for dinner."
- Dr. Hannibal Lecter

15.  "What an excellent day for an exorcism."
- Reagan MacNeill/Demon

8.  "A census taker once tried to test me. I ate his liver with some fava beans and a nice Chianti."
- Dr. Hannibal Lecter

4.  "The Power of Christ compels you!"
- Father Merrin and Father Karras 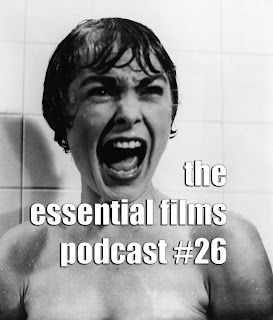 On this week’s show:

• Discovering Hitchcock
• One of the earliest “slasher” films
• The Bernard Herrmann score and Mark’s uh… impression(?) of it.
• Hitchcock’s A-list B-Movie
• “No Bail for the Judge”
• How Hitchcock convinced Paramount to distribute the film
• The book by Robert Bloch
• Ed Gein and the on-screen villains he “inspired”
• The “Inside Psycho” podcast
• Setting a new level of violence
• The dissolving of the Production Code
• A flushing toilet!
• Hitchcock’s marketing strategy
• William Castle’s carnie antics
• Marion Crane has NO chill
• The differences between the book and the film
• Norman portrayed as a sympathetic character
• The Shower Scene
• How Bernard Herrmann earned double his salary
• Chocolate Syrup for blood
• Killing your main character halfway through the film.
• Martin Balsam’s underrated performance.
• “What the hell did I just see?”
• The psychiatrist sequence and why it’s a flaw of the film
• The Sequels and the horrible 1998 remake
• The death of Filmstruck
• Always buy physical media! 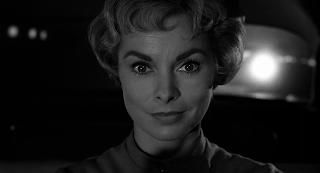 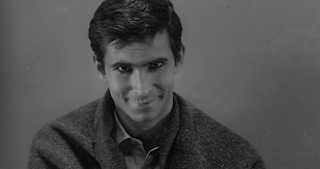 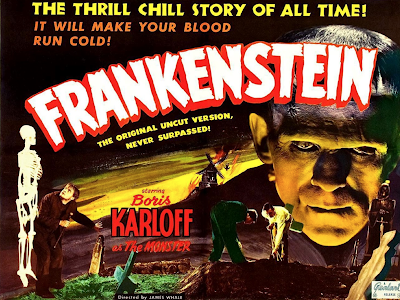 
THE MAN WHO MADE A MONSTER! 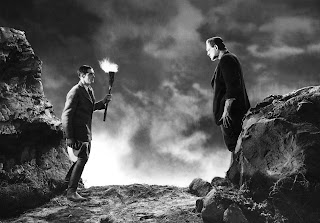 Dr. Henry Frankenstein is obsessed with death. He believes he can give life to dead flesh and creates a man to prove his theory, he creates a man by sewing together body parts from various corpses.  Instead of a man, he gives birth to a monster. Unfortunately the creature's abnormal brain causes him to break free and escape his creator as the film then focuses on the monster's attempt to find its "humanity."

One of the first books and films to really start blending genres. The film itself is not a perfect adaptation of the book. In fact it takes many liberties, with the creation of the monster's mate left for another movie altogether. Unlike a lot of early talking pictures, Whale was relatively light on dialogue, letting the monster's actions and appearance do a lot of the talking on-screen. Whale (through Shelly's work) used elements of science fiction and horror to create the monster, and his "birth" scene is still one of the most memorable in film history. Frankenstein was responsible for the imagery modern audiences associate with the Monster: Tall, Flat Top, Bolts in the neck.

This brings us to the immortal Boris Karloff. Never before or again has an actor so perfectly 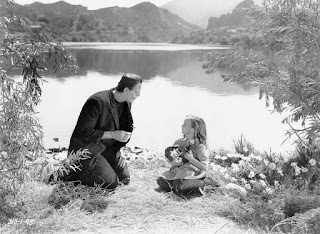 embodied the monster he created on-screen, save for his Universal Pictures contemporary Bela Lugosi with Dracula. Karloff's Frankenstein Monster is an achievement in make up, costuming and performance. It would be easy to portray the character as a mindless killing machine, as others have in other adaptations. In fact, Bela Lugosi was originally offered the part when the character was scripted as such... he turned it down.  However, Karloff manages to emote sincerity through the heavy make-up, forcing sympathy from the audience. The final fiery end (or is it?) for the creature is truly tragic.

Two key scenes to point out for viewers of this classic: First, the "creation" sequence, perhaps the most famous and iconic of horror history, and even film history. Parodied endlessly throughout the decades, it still is a beautiful example of direction, art direction and editing. From the shots of the laboratory equipment, to the lightning filled skies, to the hand slowly lifting as it is regenerated to life... it's all perfectly executed. Colin Clive as Dr. Frankenstein is a little hammy throughout the rest of the film, but here it's completely appropriate. He screams, in an almost orgasmic delight, "It's alive. It's alive! It's alive! ... In the name of God! No I know what it feels like to be God!" His joy at playing God is the terror here. 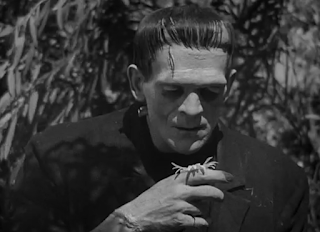 The second scene, less famous to mainstream audiences, but unforgettable to admirers of the film is the scene with the little girl by the lake. The monster, still learning with his damaged, abnormal brain, befriends an innocent little girl. She shows him beauty in the world, beauty with the flowers she is picking and how pretty they look floating on the water. Karloff's look of innocence here is disturbing juxtaposed with what we know comes next. The monster throws the little girl into the water (off-screen of course) so he can see her float... her death as a result triggers the townspeople to light the pitchforks in search of the monster. A beautiful and haunting scene.