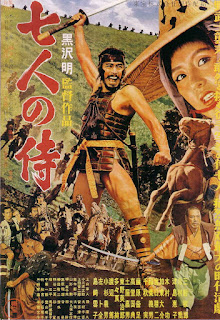 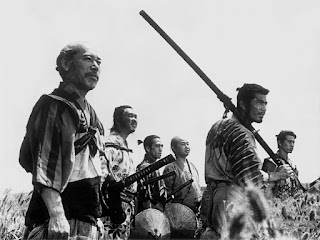 This is the nature of war. By protecting others, you save yourselves.

Seven Samurai is perhaps Akira Kurosawa's masterpiece. This is saying a lot, considering Kurosawa's filmography reads like a list of Japanese film canon: Rashomon, Ikiru, Throne of Blood, Hidden Fortress, Yojimbo, Sanjuro... the list goes on. And those films went on to inspire future great directors like Sergio Leone and even George Lucas.  However, Seven Samurai combines such a rich story, wonderful acting, phenomenal action and epic scale to deliver one of the greatest films of all time.

A group of marauding bandits have decided to spare a farming village, a regular punching bag of theirs, until the time of the next harvest.  The locals go to the village elder and it is decided that they will hire a group of samurais to defend the village and drive the bandits away forever. Since they have no money, it's decided that they need to find hungry samurai that will accept payment in millet.  In a neighboring village, an aging ronin, Kambei (Takashi Shimura), rescues a hostage from a thief, which so impresses the villagers that they immediately seek his guidance in their thief problem.  Kambei agrees to defend the village, but reckons he'll need at least seven samurai to be an effective unit. Kambei recruits the remaining six, including young apprentice Katsushirō (Isao Kimura) and samurai wannabe Kikuchiyo (Toshirô Mifune).  The seven samurai then train the villagers in preparation for the siege, and the film climaxes in one of the greatest battle sequences on film. 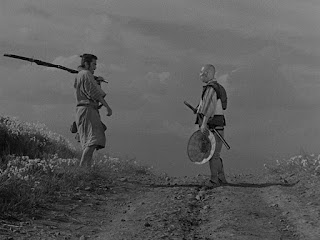 Perhaps the most memorable character in the film is Kikuchiyo, portrayed by Mifune in a star-making performance.  According to Mifune, the film was originally written as six samurai, but it was decided that six "serious" heroes was too boring. Mifune, who was originally cast in another role, was recast as the new character Kikuchiyo.  Wanting Kikuchiyo to stand out from the pack as a wild card, Kurosawa gave Mifune complete creative license to interpret the character and his actions however he saw fit.  At times, Mifune could be accused of hamming it up for the cameras, but the end result is ultimately extremely entertaining.

It's hard to believe that this was Kurosawa's first samurai film, a genre that he would become associated with the rest of his career, and he ended up making perhaps the definitive samurai film for many cinephiles.  Especially when Kurosawa innovated, or at least popularized, new storytelling tropes.  This was one of the first "getting the band together" films, where the first act of the film is spent gathering the team together for a job. Examples of this can be seen in the Hollywood remake The Magnificent Seven, The Guns of Navarone, Ocean's Eleven, Inception and even The Blues Brothers.  It also features the "Establishing Character" trope of introducing the hero in a scene unrelated to the rest of the plot. The example in this film is Kambei, willing to sacrifice his topknot, to disguise himself as a monk to rescue a hostage. This exposes us to Kambei, tells us he is an honorable samurai, willing to do whatever is necessary and, ultimately, a bad ass. 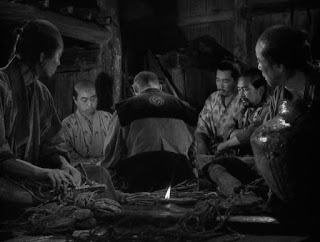 Kurosawa also proved himself as not just a master storyteller, but a phenomenal action director. The Star Wars trilogy? George Lucas lifts them directly from this film (and also steals characters from Hidden Fortress to create R2D2 and C-3PO, but that's another story.)
final battle sequence is absolutely thrilling and Kurosawa broke from tradition to film it.  Kurosawa used multiple cameras shooting simultaneously to shoot the epic sequence: a fixed camera in a standard set-up, a camera for quick action shots and what he called a "guerilla" camera to get the hard to capture shots of action. All the action and camera work was meticulously choreographed and the end result is a spectacular action sequence that continues to thrill audiences over 60 years later.  On top of this, the film is spectacularly shot and beautifully composed by cinematographer Asakazu Nakai.  And all those "wipes" you see in the

In addition to the brilliant action, the film is also expertly written.  You would think that in a story with seven main characters, one or two might get lost in the shuffle.  Each samurai is fully realized and given plenty of screen time to develop.  You have the leader, the wild card, the teacher, the master swordsman... you even have time for the young recruit, Katsuihro, to have a forbidden romance with one of the village girls. Add to this the mix of beleaguered (and sometimes comical) villagers and the film is rich with characters and identity. The only drawback is the villains, the bandits, don't get much face time except at the end of the film when they are the threat to be vanquished. But that's OK, given how beautifully the rest of the characters are developed, it's OK if the bandits are just that... bandits. 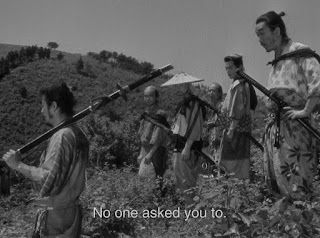 The film is a long one, clocking in at over 3 and a half hours (with an intermission), but your patience will be rewarded.  All of the character building and plot builds to the explosive final sequence, which by the time the action goes down, is well-earned.  In fact, Seven Samurai rewards you for every minute you watch the film. It is endlessly entertaining as well as being Kurosawa's epic masterpiece.