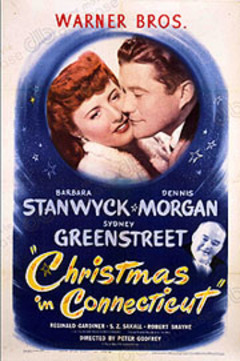 Barbara Stanwyck is Elizabeth Lane, a Martha Stewart-like writer for a housekeeping magazine that writes the most amazing recipes every month. Dennis Morgan plays Jefferson Jones is a war hero who has never had a “traditional, family Christmas.”  And Sydney Greenstreet is Alexander Yardley, the stubborn and influential publisher of Lane’s magazine whose idea it was to make sure Jones gets a traditional Christmas holiday as a guest in Lane’s home in Connecticut.  Only one problem:  Lane is a fraud.  She lives in New York City, can’t even make toast and gets all her recipes from her loveable chef/uncle Felix.  To make matters worse?  Yardley’s holiday plans have fallen through and now he insists on spending it with Lane and her fictional family in her fictional home.

Fortunately (?) for Elizabeth, her architect friend and admirer has offered his home as the stage for her charade, on one condition, that she’ll finally accept his many offers of marriage proposals.  But when Jones arrives at the cozy Connecticut house, Lane is immediately smitten.  It’s obvious from the beginning where the story and comedy will take you, but that’s ok.  Where the movie succeeds is in the extreme charm of Barbara Stanwyck as Lane.  She exhibits wonderful comedic timing, and the audience is really pulling for her to pull this charade off, while at the same time rooting for her to get together with Dennis Morgan’s character, with whom she has quite the on-screen chemistry.  This is such a departure from her most famous role, that of Phyllis Dietrichson from Double Indemnity, the cold-hearted maneater who plots to kill her husband for the insurance. 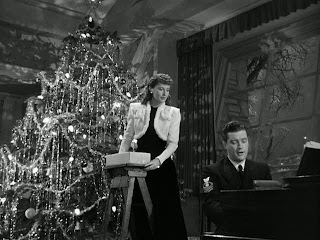 But the film also has a wonderful supporting cast in Greenstreet as the pompous Alexander Yardley.  Sydney Greenstreet was a character actor that never quite seemed to get his due even though providing sinister supporting roles in films like Casablanca and The Maltese Falcon as well as comedic ones such as this.  And let us not forget S.Z. Sakall as the affable Uncle Felix, whose butchering of the English language is balanced by his cooking and matchmaking skills as he tries to cook up a romance between Lane and Jones, all the while making sure Sloan and Lane never end up actually getting married.


The film is definitely of its time, with perhaps some outdated anti-feminist ideals.  But it is certainly a charming, holiday film.  Or as Uncle Felix might say… “Everything is hunky dunky.”