This post was originally published on SuperfriendsUniverse.com as part of the "Movies Every Man Should Own" series on December 7, 2011. 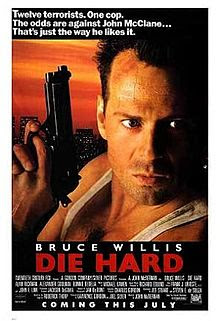 Now I have a machine gun. Ho Ho Ho. 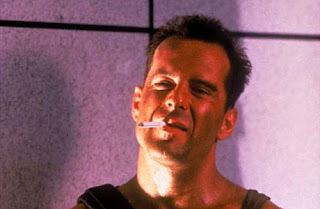 Plot:  New York City cop John McClane heads to Los Angeles to visit his estranged wife and children in time for the holidays.  But shortly after he arrives at his wife’s high-rise office building a group of terrorists invade, killing and wreaking havoc on the holy night of Christmas Eve.  It’s up to McClane to take down the terrorists by himself…

WHY SHOULD YOU OWN IT?

By 1988 John McTiernan had directed an action classic in Predator.  Could he repeat the same success with Die Hard?  The short answer? Yes.  Not only was Die Hard more financially successful (quite a feat for the director’s third film), but it exceeded the sci-fi/horror shoot ‘em up’s action packed scenes.  McTiernan is one of the the best action director’s of all time, having also gone on to helm The Hunt for Red October, Die Hard with a Vengeance and The Thomas Crown Affair.   When it comes to action, this guy knows what he’s doing.  Die Hard is jam packed with amazing sequences… from John McClane’s escape in the elevator shaft, to the destruction of an LAPD SWAT tank (“The quarterback is toast!”) and of course McClane jumping off the top of a 40-story building to escape an exploding helicopter.  All of it looks as good in 2011 as it did in 1988.

Jeb Stuart and Steven E. de Souza pen an extremely tight and well-put-together screenplay… a rarity for any action movie.  From the opening scene it sets up and foreshadows future events.  A businessman tells McClane to take off his shoes and make “fists with his toes” to relax.  Later, when McClane is doing just that, the terrorists attack and he has no time to put on his shoes.  This leads him to spend the ENTIRE MOVIE barefoot, which proves disastrous when he has to escape the bad guys by running through glass.  There are other little moments just like this in the film.  The entire movie from start to finish makes sense, with each event (big or small) having an impact on the next.  Stuart/de Souza’s gift of writing also serves them well in the dialogue department.  Not only do they sprinkle great lines throughout the script (“Yippee-Kay-Yay Motherfucker”), but the radio conversations between McClane and his only ally, Sgt. Al Powell, are captivating. They also heavily rely on (gasp!) character development.  McClane is a fully realized character.  Now, in the future sequels he does become more of a caricature, but in the original he is a desperate man, determined not only to defeat the bad guys, but also reunite and reconcile with his wife.  Powell, his only ally in the movie, also has a nice little story arc that climaxes nicely at the end of the film (no spoilers here.)  And of course, who can forget the great Hans Gruber character?  Excellently written, but even more excellently acted. Speaking of…. 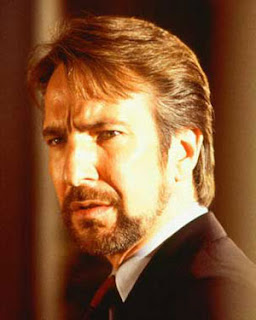 Modern audiences probably most recognize Alan Rickman as the despicable Professor Snape from the Harry Potter franchise.  While he’s a veteran actor, American audiences first noticed him as the delightfully villainous Hans Gruber in Die Hard.  Gruber is the smooth-talking, calculating and evil terrorist (or is he?) that has taken over Nakotomi Tower.  He is absolutely the Lex Luthor to McClane’s Superman… relying on intellect instead of brawn.  He, by far, has the best lines in the film and Rickman just plays him to perfection.  Gruber just oozes evil and it’s so much fun to watch.

In 1988, Bruce Willis was mostly known for his work on the television show “Moonlighting.” And while the show was a good launch pad for his career, Die Hard was his star-making performance.  And it’s easy to see why.  He’s completely believable as the bad ass New York cop that will stop at nothing to take down the invading terrorists.  He has built his entire career around the John McClane character since then, much like Samuel L. Jackson has built his career on the Jules persona from Pulp Fiction.  Bruce Willis cements himself as one of the greatest action movie heroes ever and it is no coincidence that he topped the list of this website’s 100 Greatest Movie Bad-Asses.

Die Hard is a great alternative to the sugary-sweet Christmas movies that come around every December (not that there’s anything wrong with that), but also it just may be the greatest action movie of all time.