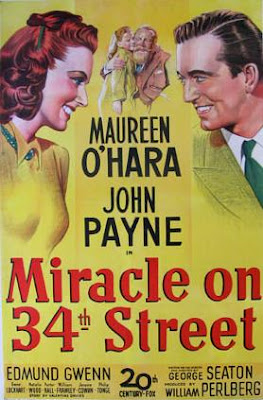 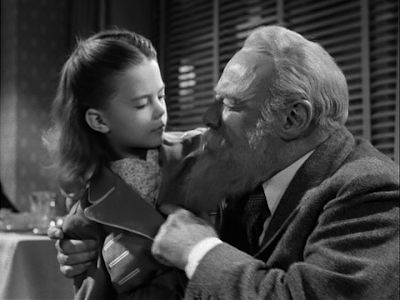 • Would you please tell her that you're not really Santa Claus, that actually is no such person?
• Well, I hate to disagree with you, but not only IS there such a person, but here I am to prove it.

One of the most warm-hearted films ever made, Miracle on 34th Street depicts the trial of a Macy's store Santa Claus who truly believes he is THE Santa Claus, but at its heart, it's a film about faith. Not just for the other characters, but for the audience itself.  On Thanksgiving morning, the usually affable Kris Kringle is disgusted to find the actor hired to portray Santa Claus in the Macy's parade is falling-down drunk.  Not wanting to see the children disappointed, Kringle quickly agrees to Mrs. Walker's (the event organizer) request to take the Santa mantle for the parade.  Kris does such an outstanding job that he takes on the job full-time at Macy's.  Kris spreads warmth and goodwill during the Christmas shopping season that it reaps many rewards, financial and otherwise, for the department store.  Kris insists that he is the real Santa Claus, which is why he's so good at the job.  The contemptible Mr. Sawyer, a staff psychologist, disagrees and has Kris committed to a mental institution.  What results is a courtroom battle where Fred Gailey, a lawyer that Kris has befriended, attempts to prove that Kris is, unquestionably, the one and only Santa Claus. 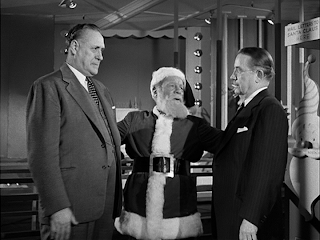 The film is cast with many talented actors of the time: Maureen O'Hara, John Payne, Porter Hall, William Frawley and Gene Lockhart.  However, the most memorable performances clearly belong to Edmund Gwenn and Natalie Wood.  Wood plays Susan Walker, the skeptical child who does not believe in fairy tales, myths or Santa. This was her star-making performance that launched Wood's career.  Gwenn, despite getting third billing, is the real star of the film.  When we are first introduced to Kris Kringle, he is walking the streets of New York on Thanksgiving Day.  You don't see him with any reindeer, you don't seem him at the North Pole and the only sleigh he rides in is the one in the Macy's Thanksgiving Day parade.  Naturally, since he is the hero of the story, there is an implied trust between the protagonist and the viewer.  We believe what he presents to us.  No matter how ludicrous it may seem.  Unlike most movies about Santa Claus, this film has no magic moments.  Heck, the most amazing thing Kris does is speak Dutch to a little Dutch orphan.  Something certainly anybody with a proper background could do.  He brings people together at Christmastime, and slowly convinces every one around him that he is the real deal.  Most of this of course is due to the wonderful acting abilities of Edmund Gwenn, who won an Oscar for his portrayal of Kris. Gwenn received an Academy Award for Best Supporting Actor for his performance as Kris Kringle, and it is well-earned.  All the audience has to go on is Gwenn's performance... and he delivers in a big way. Gwenn's Santa Claus is perhaps the most memorable Santa in screen history. 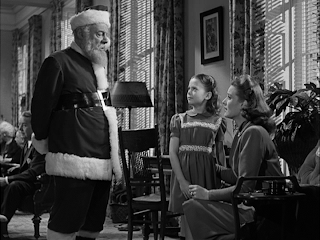 Although the film was released in May of 1947, this film has become essential Christmastime viewing.  While the plot of a department store Santa Claus certainly lends itself to Christmas viewing, the spirit of the film is what makes this a holiday favorite.  One of the moments that leads some to question Kris' sanity is when he starts sending customer's away from Macy's to other stores (including Gimbel's, Macy's biggest competitor) to find the items they need.  The show of goodwill and generosity by putting the spirit of Christmas over the commercial not only warms the hearts of the fictional customers, but also the audience.  By the end of the film, whether we believe Kris is Santa or not, we want him to win the hearing.  Kris Kringle's spirit is an inspiration to any potential Scrooge.

"Faith is believing in something when common sense tells you not to."  That is a line repeated in the movie... and by the end of the film, we as the audience truly believe that Kris IS Santa, despite having no proof.  And there in lies the true miracle of the film.