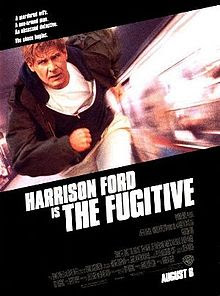 Richard Kimbal is a successful surgeon who comes home and finds his wife brutally murdered. He fights with the intruder, a one-armed man, but unfortunately, the murderer gets away. Overwhelming evidence points to Richard as the actual murderer, and he is sent to prison. On a lucky break, he manages to flee his captors and goes on a one man crusade to find the real killer (and the people behind him.) 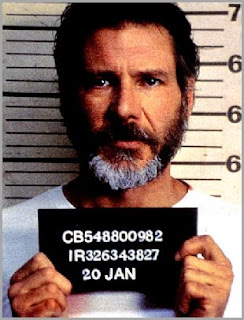 Harrison Ford has the golden touch when it comes to bringing to life iconic characters. He did it with Han Solo… he did it with Indiana Jones. In The Fugitive, he plays less of a bad ass. He’s not tough, he can’t necessarily fight all that well. He’s just a brilliant surgeon, has keen survival instincts and he’s clever as hell.

What makes this film a lot of fun is that it is two films in one. It is a detective story of Dr. Richard Kimball looking for clues and piecing together evidence of that tragic night to figure out just exactly who killed his wife and even more importantly, why. It’s also a thriller. Because while he’s doing all of his research and trying come up with his theories, he’s also being relentlessly chased by the most dedicated law enforcement official of all time in US Marshall Sam Gerard (Tommy Lee Jones.) Kimball always manages to stay just one tiny step ahead of Gerard at all times, but Gerard will not give up until he gets his man. He doesn’t care whether or not Kimball is guilty or innocent. He just knows there’s an escaped convict… and he’ll stop at nothing until he catches him. 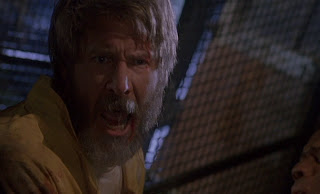 At the end of the film, the two storylines merge flawlessly. You find out the who, what, when, where, why and how of the whole mystery… but then it packs in an extra 10 minutes of action on top of that just to cap it all off. If you’ve never seen this film, you owe yourself a watch. Ford, as pretty much always, is great and it’s fun watching him play the pursued as well as the detective. Tommy Lee is a scene-chewing machine, but a lot of fun to watch. In fact this performance earned him an Oscar. If you have seen this movie before… even knowing the ending ahead of time, trust me it’s worth a re-watch. It’s every bit as much fun as you remember.
at February 20, 2012