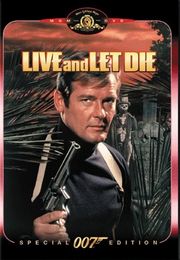 A man comes. He travels quickly. He has purpose. He comes over water. He travels with others. He will oppose. He brings violence and destruction.

James Bond’s mission:  take down a powerful heroin drug lord with a complex world-wide network, psychics and voodoo at his disposal.

Unlike previous DVD of the Day entry, Licence to Kill, Live and Let Die is pure and utter campy goofiness.  And you know what?  Ain’t nothing wrong with that.

Each and every Bond, from Sean Connery to Daniel Craig, has given their own spin and interpretation on the character.  Roger Moore is no different.  Moore’s take on the character is someone with kind of a dark sense of humor, but ultimately all of the Moore Bond films are a little silly and a little campy.  This being the first of the 7 times he played the character, the camp isn’t quite as over-the-top, but it’s still there.

I mean, come on… the 70s was full of Blaxploitation films like Shaft and Superfly, and for some reason, someone at MGM thought it’d be a good idea to make a Bond Blaxploitation film.  The results are kind of hilarious, with the word “Honky” being tossed around like it was going out of business, a voodoo witch doctor, and James Bond running around Harlem… how could you not love this movie?

Live and Let Die marks the beginning of the Moore era.  A lighter, campier, goofier Bond.  But hey, it’s still James Bond.  You still get cool car chases, explosions, hot women and lots of bad guys getting shot.  At the end of the day, isn’t that all you really need from a Bond movie?
at July 19, 2010 Links to this post

Email ThisBlogThis!Share to TwitterShare to FacebookShare to Pinterest
Labels: Reviews, The Essential Films 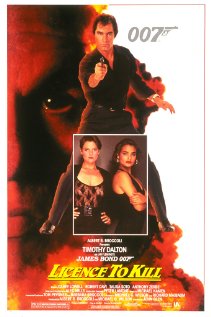 
This private vendetta of yours could easily compromise Her Majesty’s government. You have an assignment, and I expect you to carry it out objectively and professionally!


When CIA operative Felix Leiter is left for dead by vicious drug kingpin, Sanchez, James Bond makes it his personal vendetta to take him down… going so far as becoming a rogue agent.


All right, I know what you’re thinking.  ”Timothy Dalton… really?”  Yes really.  Yes, I will admit he is definitely the weakest of the 6 men to play the ultimate male (no, not Thunderlips), James Bond.  However, License To Kill was one of the grittier entries into this series.  Sean Connery will forever and always BE Bond.  Everyone else is just playing him.  But don’t handicap this movie because Dalton isn’t Bond.  Now, don’t get me wrong, I grew up with Roger Moore as Bond.  And while I loved him as a kid, as an adult I realize that he took the franchise in kind of a silly, gimmicky direction.  Nothing wrong with that, I suppose, but I respect what Dalton did with the character.  In Licence to Kill, Bond is a little more believable, a little grittier, a little tougher and a lot more cynical.  In fact, he did what Daniel Craig is currently doing now with the character.  Granted, Craig is a lot better at it, but I digress.  License to Kill doesn’t portray Bond as guy who needs gadgets, but rather as what he’s supposed to be: a highly skilled, cunning, secret agent.  There are one or two cute little Q-Gadgets, but for the most part the movie Bond has to rely on his training and skills.  Furthermore this film features something that is lost in today’s cinema:  STUNTS.  My lord, in a day and age where EVERYTHING is CG’d to death, this film relies on stunt men doing dangerous stunts, on REAL buildings and vehicles exploding.  What a freaking concept!  It looks so much better and cooler when you know that the 18-Wheeler at the end of the film was actually blown up by a stunt coordinator and not a computer geek with a laptop.  One other thing I’d like to point out is the villain of the film, Franz Sanchez.  While Goldfinger, Dr. No, Trevelyan and Blofeld will go down as the most famous Bond villains, it’s a shame that Sanchez gets ignored.  Again, he’s a more realistic villain.  He’s not out to conquer the world or blow up a country, he’s a drug lord out to make money.  Pure and simple.


Anyway, you can hate on Dalton all you want.  Yes, he’s not the best Bond.  But Licence to Kill is a fun, ass-kicking movie with lots of explosions and sweet stunts.  And really, what more can you ask for?
at July 13, 2010 Links to this post